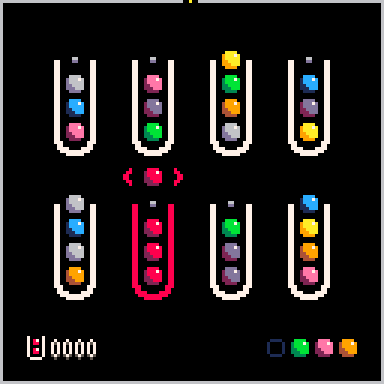 - Infinite (sort forever)
- Blitz (sort quickly)
- Clear (also sort quickly, but you don't have to optimize for points)
- Knockout (KILL YOUR FRIENDS VIA BEING ORGANIZED STRATEGICALLY)

+ 16 tracks of music (30 minutes) (not all of them are during gameplay, but they're all good i swear)

i've written many permutations of this

i started this game in april

please don't ask why it took so long lol

It's a game where you sort orbs, as quickly as possible to get as many points as possible.
Or, in Clear, the point is to play the game as little as possible.

Play it however you like. Increase the combotimer. Turn it off. Set the color count a little lower. Do whatever. Have fun.

ALSO IT'S ALL FREE :D

Neurodivergency with combos. A game about quickly sorting colored shapes in groups of four.